Eleven and a half billion miles - and still going...


Today's NY Times reports that Voyager 1, launched 35 years ago, is reaching the Heliosphere, the outer edge of the solar system, some eleven and a half billion miles from launch. On board is a message from earth and a CD of music. Below is list of the the musical offering; it looks like a great 'listen'. Ludwig, Johan and Chuck made the cut (among others). My personal fave is Blind Willie Johnson's, Dark Was The Night. What strange and wonderful sounds we humans make.
http://voyager.jpl.nasa.gov/spacecraft/music.html

Above, The Brandenberg Concerto No 2, 1st Movement, accompanied Johnny B Goode and Dark Was The Night onboard...here's the Allegro and Andante

And - Blind Willie Johnson's Dark Was The Night - Cold Was The Ground...below.

Posted by Arne Brogger at 6:49 PM No comments:


Quinn Sullivan is 14 years old http://www.nytimes.com/2013/06/23/arts/music/teenage-blues-phenom-quinn-sullivan-releases-getting-there.html?src=twrhp. He plays guitar. Blues guitar. And Buddy Guy just took him on tour. Asked why he’s smitten with the blues, Quinn said, (speaking of Mr. Guy), “The first time you listen to the blues, you feel something toward it. You can already feel a story behind it. You can feel history. For me it was listening to Buddy and feeling where he’s been in his life.”

I thought about that statement, about what it is that's attractive about this uniquely American music. I was 8 years old the first time I heard it. Sitting in the den of a grade school classmate's house in Southeast Minneapolis, listening to an old Stinson Records collection entitled “Negro Sinful Songs as sung by Huddie ‘Leadbelly’ Ledbetter”, something changed in me. A middle class white boy, listening to music of the ”other”, strange and wonderful. In thinking about that experience, I too, felt a connection to the story behind what I was hearing, like, Fannin Street in Shreveport, LA. Dark and dangerous. The chippies in the bar asking Leadbelly, “…what you thinkin about? I said, I’m thinkin ‘bout a song ‘bout Fannin Street. They say, let’s hear it!” http://www.lyricsmania.com/fannin_street_lyrics_leadbelly.html . Leadbelly's description of riding the Interurban train between Dallas and Ft. Worth with Blind Lemon Jeffeson, turning the seats to face eachother, and wailing on their 12 strings. I could see it with my 8 year old eyes.

Like young Mr. Sullivan said, you can feel the history.

Posted by Arne Brogger at 1:32 PM No comments:

Following is a statement, issued today (June 13, 2013) by Ramon Dominguez:

“Riding thoroughbreds has always been my passion and my calling. When I was 13 and watched my first horse race in Venezuela , I knew that I would become a jockey, and my riding career has brought happiness and success beyond what I ever expected.

Thus, it is extremely difficult for me to announce that due to the severity of the injuries I sustained in an accident at Aqueduct Racetrack on January 18, 2013, my professional riding career has come to an end. While I hoped and even expected to be able to return to the saddle, as a result of my injuries and upon the advice of my treating physicians, it has been determined that I will no longer be able to pursue my career as a jockey.

I want to personally thank my family, fans, and fellow riders for overwhelming support in the months since my accident. I chose to make this statement to end speculation about my future, but I am not yet ready to speak publicly. I will come forward on my own, but in the meantime I ask that you please respect my privacy as I continue my recovery.”

Sad day - I used to love to watch him stalk down the backstretch; high in the saddle, five or six wide. Approaching the far turn, you could see him settle, lower and lower, and then break out of the turn, running down all comers in the final stretch.

Take a look at Ramon (above) tying the record for most wins in a single day at Saratoga - you can see his stalking style. Notice too, his restrained use of the crop. Ramon is said to have "great hands", a term used to describe jockeys who have 6th sense relationships with a horse. When other jocks had trouble with a difficult mount, astute trainers would put Ramon in the irons. He would climb aboard, and the horse would be immediately calm. Horses ran for Ramon. This partnership with the animal resulted in three Eclypse Awards, recognition of his status as one of the winningest jockeys in the business.

Aside from his skills as a jockey, Ramon is a truly humble and admirable individual. He lives in Queens, a working class borough in New York City. He drives a Chevy. He's a committed husband and father. And he's rich. That fact has nothing to do with how he lives his life; his 'great hands' seem to be as much an attitude and point of view as an equine skill. Those hands, it would seem, reach far beyond the race course.

Javier Castellano, a compatriot of Ramon's (and no stranger the winner's circle himself) said this today: "There really are no words to say how difficult this day is for me. Ramon Dominguez is one of my closest and dearest friends. He is a champion both on and off the track. He is one of the best riders that I have had the pleasure to be around but in addition he is a wonderful father, husband, and humanitarian. I will miss seeing him all of the time at the track, but I am so happy that he has his health and can have a long and happy life. So to my friend...Ramon, you are always in my thoughts and prayers, and I will be here for you whenever you need me. All the best from this day forward..."


Saratoga won't be the same this year.

Posted by Arne Brogger at 3:20 PM No comments:

Posted by Arne Brogger at 9:10 PM No comments:

Johnny Ace would have been 84 today...

Johnny Ace was born on this day in Memphis in 1929. He died of a self inflicted gunshot wound to the head at the age of 25 on Christmas night, 1954 between sets at the City Auditorium in Houston, TX.

"Depositions given by three witnesses indicate at least five people were in the dressing room, including Olivia Gibbs and her friend Mary Carter, who had a pint of vodka she was sharing with people as they came into the room. The events are described in deposition below, given to authorities by Willie Mae (Big Mama) Thornton at 12:40 A.M. on December 26, 1954:

We arrived at the City Auditorium at around 7:20 p.m. and the dance started about eight o’clock. I did not sing until about nine o’clock when I sing five numbers. The band played several numbers before Johnny Ace came on to sing. He sing several numbers and he and I sing the duet "Yes Baby." The band played two more numbers. I then went to the dressing room to change clothes, but I got busy signing autographs and I did not get to change clothes. Johnny Ace came to the dressing room and he signed some autographs. He started to leave out the door when some people stopped to talk to him. About that time, Olivia, Johnny Ace's girl friend walked up and Johnny and Olivia came into the dressing room. Johnny sit on a dresser in the dressing room and Olivia sit on his lap. Shortly after he sit down, two more people who were in the dressing room, Mary Carter and Joe Hamilton, began running around. I looked over at Johnny and noticed he had a pistol in his hand. It was a pistol that he bought somewhere in Florida. It was a .22 cal. revolver. Johnny was pointing this pistol at Mary Carter and Joe Hamilton. He was kind of waving it around. I asked Johnny to let me see the gun. He gave it to me and when I turned the chamber a .22 cal. bullet fell out in my hand. Johnny told me to put it back in w[h]ere it wouldn’t fall out. I put it back and gave it to him. I told him not to snap it at nobody. After he got the pistol back, Johnny pointed the pistol at Mary Carter and pulled the trigger. It snapped. Olivia was still sitting on his lap. I told Johnny again not to snap the pistol at anybody. Johnny then put the pistol to Olivia’s head and pulled the trigger. It snapped. Johnny said "I’ll show you that it won't shoot." He held the pistol up and looked at it first and then put it to his head. I started toward the door and I heard the pistol go off. I turned around and saw Johnny falling to the floor. I saw that he was shot and I run on stage and told the people in the band about it. I stayed there until the officers arrived." 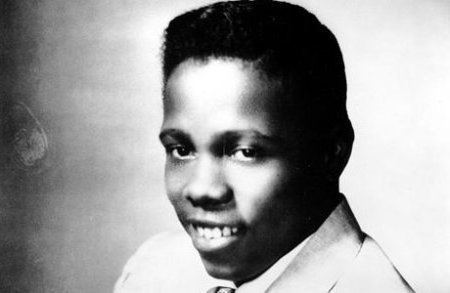 Johnny Ace (John Alexander) signed with Duke Records in 1952 as one of its original artists. Duke was owned by a principal of Memphis radio station, WDIA.  Unable to fund an expanding roster and support a hit record, Duke was acquired by Peacock Records of Houston, owned by Don Robey. Robey, according to Jerry Leiber (of Leiber/Stoler fame) was a 5th Ward gangster who used threats and intimidation to expand his empire. Really? In the music business?  Robey is famously mentioned in the tune ‘Johnny Ace Is Dead’ by Dave Alvin: “Slick Don Robey, the record company man, had big diamond rings on both his hands. ‘I’m gonna take him back to Memphis in a refrigerated truck. ‘Cause Johnny Ace is gonna make me a million bucks.’”


The picture above was taken by Ernest Withers, Memphis street photographer and portraitist. Visiting his Beale St. studios in 1999, I saw a shot he’d taken of Johnny's car, a big white Caddy with 'Johnny Ace' painted on either side, framed by black musical notes. I asked him how much he wanted for it – he said $100. I wish I’d parted with the dough.


Johnny’s biggest hit occurred posthumously, ‘Pledging My Love’ – later covered by Elvis, among others. Take a listen – simple, powerful, soulful. Five thousand folks attended his funeral. Women sobbed. The white Caddy followed the hearse.  They laid him to rest. The next year, Don Robey made his million bucks.

Posted by Arne Brogger at 6:16 PM No comments:

The raid on Lindisfarne monastery, marking the beginning of the Viking age, (probably) happened 1220 years ago today. Some forty years earlier, Charlemagne, in an effort to subdue the heathen Saxons (extreme northern Germany) marched 1500 citizens into the sea, drowning all, but only after having baptized them in the name of Jesus Christ. A few escaped, mostly some nobles, who fled to their homeland of Denmark. There, they shared with their fellows what had happened.

The Viking longboat - shallow draft, sturdy at sea, able to sail up rivers, - when combined with the Damascus steel of the Viking broadsword, proved a deadly combination. Quickly, the Vikings discovered what Willie Sutton espoused years later ("Why do you rob banks, Willie?" - "Um, 'cause that's where the money is.") In those days, the money was in the monasteries. Also, not without coincidence, were they the headquarters of Christendom. The Vikings hit Lindisfarne and cleaned up. When they were done, they marched the priests into the sea. And drowned them all.

"AD. 793. This year came dreadful fore-warnings over the land of the Northumbrians, terrifying the people most woefully: these were immense sheets of light rushing through the air, and whirlwinds, and fiery dragons flying across the firmament. These tremendous tokens were soon followed by a great famine: and not long after, the harrowing inroads of heathen men made lamentable havoc in the church of God in Holy-island, by rapine and slaughter."

Posted by Arne Brogger at 9:58 PM No comments: