On the occasion of Duke Ellington's birthday


Early in my career, I was a middle agent in the music business. As such, I bought and sold dates on national touring attractions, selling primarily to the college market. One of my ‘clients’ was Luther College in Decorah, IA. One day in the spring of 1973, I got a call from the Director of Student Activities, “These kids want Duke Ellington or somebody like him…” or somebody like him? No – we’ll get Duke. I called the Willard Alexander Agency.

I booked the date and paid Duke a whopping $3500 (correct number of zeros). He brought a full 10 piece band. The contract rider called for ten music stands. Music stands hold sheet music. Not something you find in a rock ‘n roll rider. Production specifics were minimal. “Buyer to provide adequate sound and lights.” Huh? Again, unheard of in other riders. For $3500 the buyer got a giant in American music, ten ace players, and the charm, class and courtesy that came with the whole package.

Wanting to meet an American legend, I drove down to Decorah to 'deliver' the show. The concert venue was the gym. The stage sat against one cinder block wall, under a raised basketball hoop. ‘Luther Vikings’ in blue and gold provided the backdrop, flanked by images of bearded barbarians in horned helmets. Bleachers lined both sides. Acoustically, it was horrible. Sound consisted to two bass bins, down left and right, with horns atop. Lights were two pop-up trees, eight cans each and one Troopette spot, holding a four gel boom. Effective throw was maybe 60 feet. Any touring band would take one look, and get back on the bus. Duke didn’t bat an eye.
The band loaded in. The road cases were filled with stickers. “Passed Customs – Melbourne”, “Passe Douane – Orley”, Hong Kong, Pago Pago (!), etc. Everyone was polite. Everyone carried a chart case. These cases were placed next to each chair and each chair sat in front of a music stand. I asked one of the horn players about the charts. “Everyone reads?” He looked at me like I was nuts. I could feel my face redden. Of course everyone could read. What was I thinking. Sensing my discomfort he said, “You never know what the old man’s gonna call. And you’ve got about 12 seconds to find the chart and get it up on the stand. If you’re late, he’ll say, ‘we’ll begin this tune as soon as Mr. so-and-so finds his place’”

God-awful production values, shitty venues, and low money. He’s Edward Kennedy Ellington, for the gods sake…why? I had a hard time processing that one. It wasn’t until Duke hit the stage and settled behind the piano that I got it. He turned to the audience (packed) and uttered his signature line. “Ladies and gentlemen, we DO love you dearly.” And he did. It showed. And then there was the music. No Billy Strayhorn in attendance (though he was acknowledged by Duke, more than once). Duke’s son, Mercer, carried Billy’s horn parts. Duke looked at his grey haired son from time to time, and beamed. I’ve seen the same exchange before. Allen Toussaint was a client of mine years later. His son, Reggie, played percussion in his father’s band. When Allen introduced the group mid set, he always said the same thing, “…and on percussion, my son Reggie, in whom I am well pleased.” When that moment came in Duke’s show, his line was, “…and my darling son, Mercer, on trumpet.” I don’t know if it was a regular thing. Mercer stood, and looked at his shoes.

Duke pushed that band through its paces, very much in command. And there was a fair amount of frantic shuffling through chart cases as sheets were shifted on the stands. Duke would raise his hand, moving his wrist like a metronome, and a new tune would kick off. The sense I got, watching from the bleachers, was that Duke (and the band) were present. They were here, now. No matter how many times they had done it before. The band played. Duke conducted.  And they all did it because they HAD to. It was what they did.
Mercer, aside from being a trumpet player, was also road managing. After load-in, Duke, through Mercer, asked to speak to the sound man. I dutifully produced him. "You're doing sound?" Duke said to the guy. "Here's what I want. Turn it up loud enough so you can hear it - then DON'T TOUCH IT." There was NO sound check.

The gym began to fill. Showtime was 8:00. The band was gathered in the hall by the door closest to the stage (3 foot risers, typical college low tech). At 7:59 Duke appeared. "Places, gentlemen!" Talking stopped, everyone lined up. "Take the stage."

The audience was a mixture of callow students, fresh faced Scandinavian kids, most of whom didn’t have a clue as to what they were witnessing, and middle aged rural Iowans. John Deere hats had been left at home and the tell-tale white forehead above the brim line spoke of years atop a tractor. Flower prints seemed favored by the women. There was an eagerness to them as they filed in and settled in the bleachers. The show did not disappoint.

After the show, Mercer asked if I'd like to meet his father and be properly introduced. Wood eye, wood eye?! You betcha. The 'dressing room' was the boy's locker room. We walked in. There was one light on in the front of the room and the faint odor of athletic perspiration filled the space. Duke, sitting in the shadows, was resting in a chair next to a row of lockers. He had a doo-rag on his head, he was nude from the waist up. His eyes were closed. "Papa...Papa?", Mercer whispered. Duke looked up. "Papa, there's someone I want you to meet." I felt about 20 feet tall. I'll never forget it.

Sitting in the dim light of the locker room, Duke and I spoke briefly. He wanted to know about Luther College. Was it a religious school? He had just written an oratorio for a mass and wondered if the school might be interested in such a thing. Looking back, he probably thought I was with the college. No matter. I was sitting on a bench in front of some lockers where, five hours earlier that day, someone had sat surrounded by the boisterous noise of towels snapping, lockers slamming. Now it was quiet. And I was talking with Duke Ellington.
Posted by Arne Brogger at 1:24 PM 1 comment:


When I was an agent at APA in New York, we represented Rosemary Clooney. One night, she was playing the Westbury Music Fair out on the Island. It was a command performance for the New York office - we used to call it “servicing” the client. Five of us piled into the Lincoln Town Car with plates that read APAAGNT and headed out through the Queens Midtown Tunnel. I had never met Rosie (as she was known) until I walked into her dressing room. I found her to be charming and open. She had a nephew, George, who was a struggling actor and who was represented by our West Coast office. No one knew from George, then.

Rosie was seated on a couch. She wore a caftan; she had a commanding presence (get the picture), and was holding court in a manner befitting showbiz royalty. She told a story about Irving Berlin who, at the time of the story was about 96. At the time, the youngest person in the Berlin Office on 6th Ave was a secretary who had been with Irving for forever. She was 84. The story was that Steven Speilberg had called the office inquiring about rights to a particular tune he wanted for a movie. He was told Mr. Berlin with get back to him. Time passes. Nothing. Speilberg calls again. Again he’s told Mr. Berlin will get back to him. And again, nothing. Finally Spielberg calls and tells the secretary, just name a price and I’ll pay it. I want that tune. He is politely told the following: “Mr. Berlin is reserving that piece for a future project.”


A couple of days ago (May 4, 2012) I heard news of the passing of Sid Selvidge, Memphis music man, consummate artist, producer of the internationally syndicated Beale Street Caravan – and friend. Sid was also friend to the last of the great bluesmen in the known universe: Furry Lewis, Bukka White, Joe Willie Wilkins, Houston Stackhouse, to name a few. They were his mentors. They were his co-conspirators. They were his pals.  And now he’s gone, and I didn’t get to tell him how much he meant to me. A selfish feeling, really, to tell him how much his music meant to me, the times I listened and was transported. He and I shared the friendship of a lot of those “old guys” as he used to say. “I love those old guys…” Yup – you did, Sid. And they knew it too.

Sid told me about turning Furry’s guitar only to have it snatched back and re-tuned to the vagaries of Furry’s ear. Of hanging out and drinking Ten High with him out of a cracked coffee mug. Of gigs.  When Furry died, Sid and fellow Memphis music great, Lee Baker, played him out the door with When I Lay My Burden Down.  Just before that final tune, a young man stood up and berated the congregation with a rant about how people had gotten rich at Furry’s expense. In thinking about that incident, I considered how rich I had gotten through my association with him - not in coinage that would be recognized by a bank. I was enriched by his presence – like I was by that of Sid.

So…Sid and Furry and the others are someplace else. Someplace where the guitars are always in tune.  And I’m here. Missing them.
Posted by Arne Brogger at 7:35 PM No comments:

Johnny Thunders & Some Other Stories... 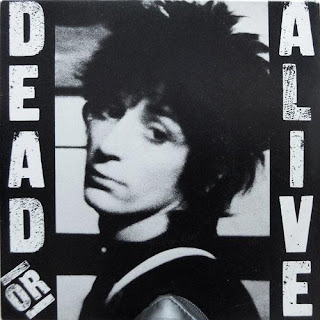 In the late ‘80s I put then client Johnny Thunders into 1st Avenue in Minneapolis and flew out to cover the show. I tell JT about this local group, The Replacements. He's never heard of them. For him the world ended at the Hudson River and time stopped in 1981. I mention that they wrote a song about him, Johnny’s Gonna Die. He's not happy, at all. "Fuck those assholes..." At the show, I'm talking with Paul Westerberg, he asks if he can meet JT. Gulp. We go back after the show. I introduce them, "Paul is with the Replacements..." Then it gets ugly. "You wrote a song about me? I'm gonna die? Fuck you, you asshole" and blah blah. We're edging for the door, I open it and am about to pull Paul out by the arm. He stops, looks as JT. "Johnny, I wrote it. I meant it. Don't let it happen." Unfortunately, it did.

Years ago I lived on Morton St. in the Village. A neighbor, who had a pet boa, went on vacation. She asked Tullio the bldg super to feed it. 'The dead baby mice are in the freezer, just drop one in the terrarium.' Simple. On the appointed day, Tullio, Willie B. (the super of the bldg across the street), me and the lovely Rosa who ran the wash-and-fold on the corner, gathered around to watch. The mouse was deposited. The snake rose up. Motionless. We waited. Bam! - it struck. Rosa gasped. Willie B. says, "Jes like the lanlord..."
Posted by Arne Brogger at 1:34 PM No comments: